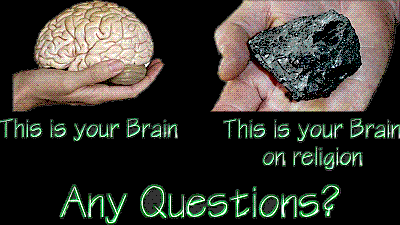 Many Christians seem to suffer from what I am calling “Split-Brain Syndrome”. That is, many Christians seem to switch unwittingly between a Science Brain and a Church Brain. This psychological problem is nurtured by a culture that divides the public and private spheres and is reinforced by a popular polemics that are framed by the conflict models of religion vs. science, faith vs. reason, religion vs. secular, Ham vs. Dawkins, etc. As my own story will demonstrate, this “double-mindedness” is not peculiar to Christians.

Though not a Christian at the time, in my youth, I experienced this split-brain syndrome. A syndrome that I see in many students, churchgoers, and even in academics (See for instance the essays in In Six Days). I had a keen interest in the sciences. At a very early age, I decided I wanted to be a zoologist. I memorized scientific names for many animals. I still love to read biology books especially about insects. My sons and I watch animal documentaries on most Monday nights. As a child, one of my favorite shows was David Suzuki’s The Nature of Things. 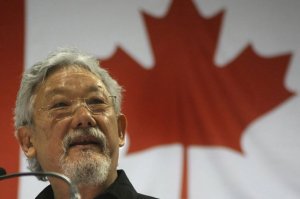 I am not sure why when it came time to apply for University that I did not go that route and instead pursued other interests. Nevertheless, my passion for the sciences cohabitated (I cannot say was wed to) a religious credulity. In this way, and in this way only, might I own Bill Maher’s term “religulous”.

Bill Maher is right. There is religulousness in the world. Indeed, it may even be the prevalent form of religiosity in the West. Yet, it is not the only form. It is a neo-paganism or a neo-gnosticism. It is what Christian theologians have called superstition. (Which brings to mind Stevie Wonder’s song “Superstition” and CCR’s “Tombstone Shadow“.)

So, in school and in much of my reading, I had my science brain. Yet, in my quest for meaning in life and for a connection with “the divine” (whatever that was), for myself and many of my friends our approach to beliefs and practices was like shopping for clothes. Try it on, if it fits take it home. Wear it for a while. When you outgrow it, fashion changes, or you simply tire of it put it in the closet and go back to the store. 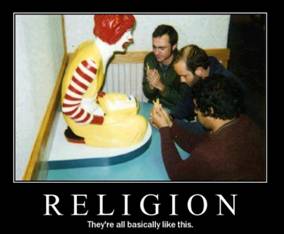 My friends and I dabbled in beliefs and practices, from Astral Projection to Wicca (I never did try Zoarastrianism).  For a time, we read our horoscopes daily and shared our signs like people share their Myers-Briggs score (are they really all that different?). Once our homework was done, alien abduction, ghosts, sasquatch, past-lives, healing crystals, and tarot cards were all possible for us.

Carl Sagan helped me to bridge the gap in some ways but re-inforced my anti-Christian bias due to his polemic against fundamentalist Christianity (which seems to be the only understanding of Christianity he had). I began reading Sagan because of our mutual interest in extra-terrestrial life. (I was Elliot’s age when Spielberg’s E.T. was released.) 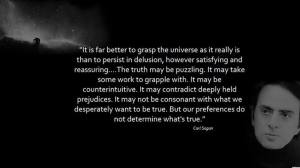 Yet, Sagan’s approach was not like that of Whitley Streiber, The Chariots of the Gods, or alien abduction documentaries. Of course, some might still ridicule Sagan for this particular research interest but why not ask the question, and if one wants an answer why not approach it scientifically. I did not lose my passionate interest in the possiblity of extra-terrestrial life but I did stop hoping to be abducted. What a strange culture we live in where one could seek one’s significance in being abducted.

In retrospect, while Sagan was rather narrow-minded and ill-informed with respect to Christian theology, he was nevertheless correct about much of his critique of the “brand” of Christianity with which he was familiar. Many of the ways that Christians approach the reading of Scripture, prayer, and worship practices amount to something akin to superstition or even sympathetic magic (see my “Shofar, So Good?”). Moreover, seemingly in knee-jerk reaction to skeptical science, particular understandings of the Bible seem to lend themselves to an unexamined credulity with respect to “paranormal” and “otherworldly” phenomena.

For instance, some popular Christian personalities now argue that of course people are being abducted by aliens and seeing U.F.O.’s but they are not extra-terrestrials they are angel or demons. 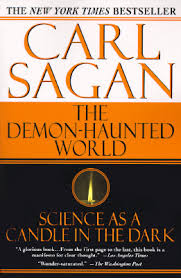 It would not hurt for a few pastors to read Sagan’s The Demon Haunted World to hone their skeptical toolbox. Here there be dragons: Do not click this link!

It surprises my atheist friends when I say I am far more skeptical now as a Christian than I ever was as a “nothingarian”. Moreover, some of my atheist friends admit their own superstitious beliefs. I believe there is such a thing as healthy skepticism. Most of us practice it when we go buy a car or at least we take someone who knows how to practice it along with us.

So, what steps can be taken to heal this split-brain syndrome? I will suggest a few home remedies and elaborate on them in future posts.

2 thoughts on “Mind the Gap I: Diagnosing Split-Brain Syndrome in Young Adults (and the rest of us)”