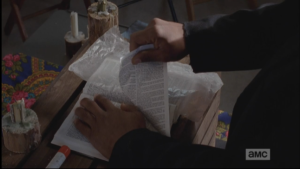 When Gordon Fee, retired Professor of New Testament at Regent College, reached the tearing of the Temple curtain that coincided with Jesus death on the cross, he described this as the Spirit of God rending the this thick curtain and shouting, “Get me out of here.” Fee’s book on the Spirit in Paul’s writings is fittingly titled God’s Empowering Presence. The Temple was a symbol of God’s presence in the midst of God’s people. Yet, the New Testament authors and I believe Jesus himself saw the Temple as a barrier to what was truly important to the Creator God, that is God desires to be with his people.

Although many Christian readers miss it, a key theme in both the Old and the New Testaments is the Creator God being present with God’s people. While some might see the climax of the Exodus in the parting of the Red Sea or the receiving of the ten commandments, it seems clear that for Moses and the author of Exodus the construction of the Tabernacle and the descent of the glory of God into their midst is the true climax of this narrative. For Moses, if the LORD does not go with them, then all that has transpired is worthless. Moreover, the author of Exodus offers a detailed description of the instructions for constructing the Tent of Meeting (the Tabernacle) and then turns around and offers as detailed an account of its construction.

Now, I suspect that most Christian readers skip or at least skim over these chapters of Exodus in order to get back to the action. However, the next book is Numbers which offers long lists of names. Where is the action? The manna, the bronze serpent, Balaam’s donkey, water from a rock, etc. However, I suggest that the list of names are there for the same reason that the two extended descriptions of the Tabernacle are included. The story is about God’s presence with God’s people.

The significance of the Tabernacle and the Ark of the Covenant (which is symbolically understood to be the footstool of God’s throne) is that they represent God’s presence in Israel’s midst.

In both time periods, there were those who felt the Temple was inviolable after all it was God’s house, the place of God’s presence. In Jeremiah’s time, they had historical precedent for assuming the inviolability of the Temple. In the time of Isaiah, against all odds, God had protected Jerusalem and the Temple from the Sennecharib and the Assyrian forces in the eighth century BC. Yet, Jeremiah himself appealed to another precedent, the destruction of Shiloh. Shiloh had been the home of the Tabernacle and the Ark of the Covenant from the days of Joshua and through the period of the Judges.

I think many Christians, especially my fellow evangelicals, have boxed God into the Bible in the way Israel’s leaders had imprisoned God, first, in the Tabernacle and then, in the Temple. So, I wonder if the Spirit of the LORD might chide us in the same way. “The Word of God. The Word of God.”

Just as the Creator God had to remind Israel that He was bigger than the Temple and Torah, so we Christians must be reminded that God, the Father, is bigger than the Bible. Christ is neither confined in nor constrained by the Scriptures. The Spirit of Christ does surprising things that are consistent with the Character of God but often break our neat biblically derived paradigms.

When his disciples were caught working on the Sabbath, Jesus said, “The Sabbath was made for people, not people for the Sabbath.”

Might the Spirit of Christ, God’s empowering presence, say to some of us, “The Scriptures were made for people, not the people for the Scriptures.”

From the beginning, the Creator has desired to be with people. I know I don’t want to be the one who gets in God’s way. The biblical description of the Bible as “God breathed” is often used to support a particular understanding of inerrancy. Yet, “life giving” is probably a better understanding of the concept of inspiration. God breathes life into people.

In a recent blog post entitled “How the Bible Forces Us to be Unbiblical“, Pete Enns wrote,

Simply put, seeing the need to move beyond biblical categories is biblical—and as such poses a wonderful model, even divine permission—shall I say “mandate”—to move beyond the Bible when the need arises and reason dictates.

Being a “biblical” Christian today means accepting that challenge: a theology that genuinely grows out of the Bible but that is not confined to the Bible.

The following books may help lift the veil or give a fresh perspective on God and Scripture:

Mark Buchanan Your God is Too Safe, Bob Ekblad Reading the Bible with the Damned, J.I. Packer God Has Spoken, Karl Barth Evangelical Theology, Walter Brueggeman The Prophetic Imagination, Gordon Fee Paul, the Spirit, and the People of God, Pete Enns The Bible Tells Me So: Why Defending Scripture has Made Us Unable to Read It , Eugene Peterson Eat This Book