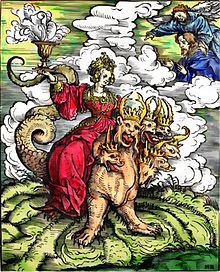 Blessed is he who reads and those who hear the words of the prophecy, and keep the things that are written in it, for the time is at hand. (Rev. 1:3, ESV)

Clearly, John expects the recipients of this prophetic letter to read it aloud in the Christian communities to which it was addressed. Indeed, the hearers would most certainly outnumber the readers. In the ancient world, one who read silently to himself was a rare occurrence. In the fifth century AD, Augustine observes that his mentor Ambrose was one such person who sometimes read without reading aloud.

Yet, the setting in which John’s words would be read aloud would most certainly be in a worship setting. That is, when the followers of Christ gathered, the church, letters from the Apostles, like those from Paul or Peter, would be read aloud to the people very likely alongside the Scriptures. The Scriptures at this time consisted of the Law and the Prophets of the Jewish tradition. These texts were most likely in Greek translation collectively referred to as the Septuagint. Being read alongside the Scriptures, these texts themselves were given or gained in time a similar status to the accepted Scriptures.

John’s letter and the narrative of visions this text contains assume a level of authority. After all, John assumes that it will be accepted that he indeed had visions that come from the crucified, resurrected and transfigured Jesus Christ himself. Moreover, in this verse, he indicates that the readers and hearers are expected to keep which also suggests obedience to what they are about to hear.