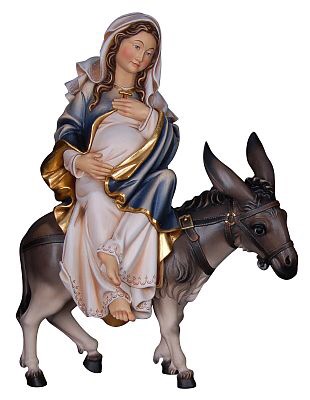 Last time, I took away the Donkey from your Nativity set. But I put it back.

I promise that I won’t take Mary away. Rather, in the Spirit of Christmas, I seek only to relieve a bit of the Donkey’s burden, to make his pilgrimage to Bethlehem a little lighter. In the process, I also hope to raise the status of Joseph in the eyes of every woman who has been “great with child”. Maybe, just maybe, he did not make his labouring wife ride a donkey for 70 miles.

Was Mary Nine Months Pregnant on the Journey to Bethlehem?

Let’s go through the same process we used in the last post, shall we?

And it came to pass in those days, that there went out a decree from Caesar Augustus, that all the world should be taxed. (And this taxing was first made when Cyrenius was governor of Syria.) And all went to be taxed, every one into his own city. And Joseph also went up from Galilee, out of the city of Nazareth, into Judaea, unto the city of David, which is called Bethlehem; (because he was of the house and lineage of David:) To be taxed with Mary his espoused wife, being great with child. And so it was, that, while they were there, the days were accomplished that she should be delivered. And she brought forth her firstborn son, and wrapped him in swaddling clothes, and laid him in a manger; because there was no room for them in the inn. (Luke 2:1-7, KJV)

Now, let’s take a look at the ESV,

And Joseph also went up from Galilee, from the town of Nazareth, to Judea, to the city of David, which is called Bethlehem, because he was of the house and lineage of David, to be registered with Mary, his betrothed, who was with child. And while they were there, the time came for her to give birth. And she gave birth to her firstborn son and wrapped him in swaddling cloths and laid him in a manger, because there was no place for them in the inn.

Now, being “with child” can cover any stage of the pregnancy from conception to parturition. So, being nine months pregnant is not ruled out but less likely given what follows.

Now, when modern translations differ in this way, that is in a way that seems to go beyond mere word choice, that is when the interpreter ought to turn to the original language. In this case, we turn to the Greek text.

Literally, the Greek says, “who was swollen” which simply meant pregnant. So, there is nothing in the Greek text to indicate the stage of pregnancy. Perhaps, swollen suggests that the woman is “showing” as we say in English. As far as I know, there is nothing in the available manuscripts to suggest that Mary was near parturition when travelling from Nazareth to Bethlehem.

Perhaps, the same traditions that we found in The Infancy Gospel of James influenced the translators of the KJV. Yet, the ESV more accurately reflects the Greek with what amounts to a simple statement: Mary was pregnant. There is no doubt that Mary was pregnant when they journeyed to Bethlehem but what follows can now be read with less urgency.

Upon entering Bethlehem, Joseph is no longer rushing Mary to Bethlehem Memorial on donkey-back because her water broke.

Instead, we can read “And while they were there, the time came for her to give birth” at a more leisurely pace. Wait a minute! If they weren’t rushing to find place to stay, if they had plenty of time, then why are we told “there was no room at the inn”? Surely, the inhospitable innkeeper at Chateau David could have found a room or a closet for them given time. If they weren’t in a rush, why did the end up in a barn with little Yeshua in a feeding trough? Or was it a cave?

I promise by the end of this series of posts your nativity will be fuller than it was before we began. And it will look nothing like this . . .

You can compare bible translations and even look at the Greek and Hebrew using Biblegateway.

2 thoughts on “Advent, Christmas, and Nativity Part II: Just How Round Was Yon Virgin?”