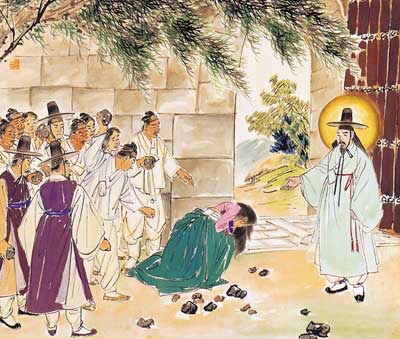 In the wake of the allegations against Judge Roy Moore, many American evangelicals are pulling out the defences, excuses, and verbal acrobatics that they used in the face of the myriad sexual allegations against then candidate Donald Trump, especially in the wake of the Access Hollywood recording in which Trump confesses his predatory habits and even identifies the approaching female host as a potential victim should the opportunity arise. Alongside multiple accusations of inappropriate sexual advances, Moore has been accused of assaulting women as young as 14 years old. The accusations against Moore come amidst a wave of such allegations that hopefully reflect a sea change in American culture that will allow women and girls to come forward more quickly and while the cases may still be prosecuted. I hope this trend in the U.S. spills across the border into Canada as well.

As they do in relation to Trump, many self-professing American evangelicals are taking comfort in and finding refuge behind ill applied biblical passages to diminish the voices of Moore’s accusers and maintain their loyalty to the Republican Party. In a culture in which being Republican and being an evangelical Christian are often treated as synonymous, one’s loyalty to the party now trumps (pun intended) one’s loyalty to creed or historic standards of Christian morality. For many people (including some white male evangelical Christians like myself), the level of hypocrisy is so patently obvious that I’m surprised it does not produce a detectable stench. If I read the Psalms and prophets correctly, it is a stench in God’s nostrils.

Are they aware of their own hypocrisy? Do they believe their own words? I must admit that in the past two years, I have become so disgusted by the cult of American-Evangelical-Republicanism that I am not even sure that I can assume the more charitable answers to even these questions. It may be that in their quest to seek and maintain political power in the United States, these men and women are knowingly exchanging truth for lies and with it the Kingdom of God for worldly power.

As I noted above, American Evangelical defenders of Trump and Moore are fond of using biblical proof texts to sanitize, sanctify, and legitimate their political and moral positions. Their use of biblical texts is not only highly selective but frequently hypocritical. Sometimes, as in the comparison of Roy Moore’s alleged predatory habits with the story of Joseph and Mary the mother of Jesus, their use of biblical texts is simply bizarre. In most cases, their application of biblical texts runs against the grain of the passages themselves. In the next few posts, I will examine some of the frequently used evangelical tropes and draw attention to other passages that American evangelicals ignore that seem “Moore” relevant to the current political context. Texts like the rapes of Dinah and Tamar spring more quickly to mind when thinking of Trump and Moore than the story of the nativity but even the nativity narrative draws attention to the silencing and shaming of women.

Let’s examine what I’d like to call the Evangelical-Republican Trump Card.

From “Lock Her Up” to “Let He Who Is Without Sin”

When the allegations are against Hillary Clinton, the cry is “Lock Her Up!” When the allegations are against Trump and Moore, the same people appeal to the letter of the law crying out “innocent until proven guilty.” As if this double standard is not enough, they must sanitize this about face with the sanctifying red-letter words of Jesus, “Judge not, lest ye be judged” and “Let he who is without sin cast the first stone.”

In the days following the release of the Access Hollywood tape, Trump supporters frequently cited these two biblical phrases to avoid making a judgment on Trump’s behaviour patterns. It is a way of putting off judgement until an illusory future moment when all the facts will be in place and as many others have pointed out erroneously applies a court room standard to the court of public opinion.

So, when Moore and Trump are accused my multiple women on the record of sexual improprieties (to be generous), pastors, politicians, pundits and surrogates on the Right can be heard to say things like, “Well, whatever happened to innocent until proven guilty and as a Christian I recall the words of Jesus who said ‘He who is without sin cast the first stone.'” Here, Jesus is used to justify, sanctify, and provide a veneer of high moral standard to the rationalizations of Evangelical-Republicans. They appeal to Scripture which they claim to hold in high regard and cite Jesus whom they claim to worship and follow.

Yet, the great irony is that the context in which Jesus is recorded as using these words is precisely in defence of a woman who is caught up as victim of male hypocrisy and injustice. In the Gospel of John (Chapter 8), an unnamed woman who was allegedly caught in the act of adultery (i.e. sexual relations outside the bond of marriage) is brought before Jesus by a group of men who assume Jesus will agree that she ought to be stoned for sin. Yet, Jesus resists this androcentric and hypocritical court of justice and draws attention to the sin of the men themselves.

Throughout history, biblical interpreters have rightly asked, if this woman was caught in adultery (and Jesus seems to accept the allegations of the men), then where is the man with whom she was fornicating. Jesus’s action of writing, erasing, and re-writing in the sand would call to mind the events of Sinai when the LORD had to write the commandments twice because the Israelites were engaged in idolatry/adultery while Moses was up the mountain. Yet, the LORD had mercy on the people.

As the woman’s accusers twisted the laws of God to their own ends and sought to call it justice, so many American Evangelical are twisting the words of Jesus to justify their own political actions, console themselves, and sedate their consciences.

I think American-Evangelical-Republicans need to look less frequently at their Scriptures for words of comfort and self-defence and begin looking more carefully at those passages that ought to send a shiver down their spines. For to some who call Jesus Lord, he will say, “I don’t know you.”