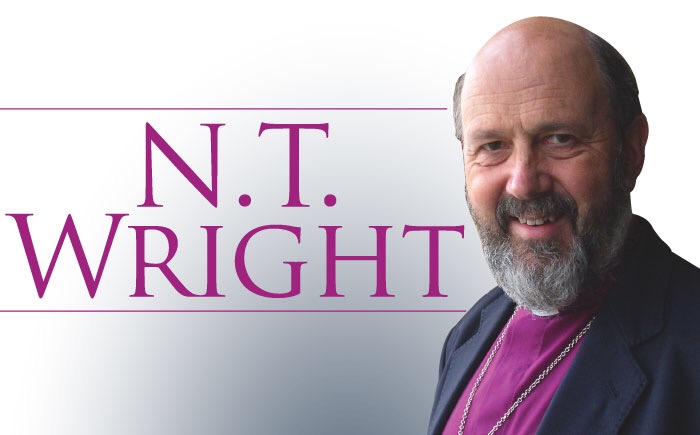 A Brief Interview with N.T. Wright

As I was writing my previous post, What Motivates Ken Ham? or What AiG Gets Wrong about N.T. Wright, I thought to myself maybe I should just ask Dr. Wright myself.

I wonder if the folks at Answers in Genesis have thought of this radical off the wall approach to dialogue. Do the writers at AiG consider actually engaging in conversation with the scholars that they so readily judge and condemn? I have it on good authority that Wright and other scholars do receive mail from Young Earthers, hate mail, that is.

In my view, scholarship is engaging in an ongoing conversation. Conversation requires listening and responding. Moreover, as the word itself suggests true conversation allows for the possibility of conversion. That is, when one enters into a conversation it is possible that you or your conversation partner may have a change of mind. (see “The Discipline of Study” in Richard Foster’s The Celebration of Discipline) In Academics, this dialogue is often carried out by reading one another’s writings and seriously engaging with and responding to each other’s arguments and thoughts.

Now, I have met Wright a few times at Regent College and at Society of Biblical Literature meetings. He likely does not remember me but we do have some mutual friends who could vouch for me. So, I re-introduced myself and asked him the following questions:

1. What motivates you to engage the Academy?

2. What motivated you to accept the theory of evolution (if indeed you have)?

Even though, I gave Dr. Wright plenty of wiggle room to bow out due to his busy schedule, even so, he generously chose to respond to my e-mail. The following are Wright’s responses to my questions with only minor editorial changes and comments in [].

Me: What motivates you to engage the Academy?

Wright: I believe all truth is God’s truth and in principle is public truth; that we none of us see more than a part of it at any one time (though confessing Jesus as the risen Lord is in itself the complete truth, but even when we confess it we none of us fully comprehend its enormous and earth-shattering implications); that we therefore need one another’s eyes and ears if we are to advance together into fuller understanding; that all my experience of academic work over 40 years has taught me that many people ‘out there’, including non-Christians, possess wisdom which by myself I would never have discovered; that some of the people I thought had a lot of wisdom turned out to have less than I had imagined; that discourse and debate can and should be fruitful, since it ought itself to be an act of love, sharing what we have glimpsed and received, and of humility, receiving from others what they have glimpsed and received. Insofar as all of this is set forward by academic engagement (that isn’t always the case but it often is and can be), then of course, since for whatever reason God seems to have given me the gifts for such engagement, that is what I do as a matter of vocational obedience

Me: What motivated you to accept the theory of evolution (if indeed you have)?

Wright: There are many ‘theories of evolution’, and by no means all of them buy into what may be called ‘evolutionISM’, which is the real problem — just as the underlying problem isn’t ‘science’ (as many imagine) by ‘scientism’. Darwin’s discoveries were released into a social, cultural and political context where many already — because of the latent Deism and Epicureanism — believed in a world which ‘made itself’ without divine intervention, so naturally most who picked up what Darwin had said interpreted it that way, i.e. that this was a non-theistic evolution of blind chance. That’s classic Epicureanism: a first-century worldview, not new in the eighteenth or nineteenth century.

But many leading theologians — famously, the great B B Warfield included — took the view that though this interpretation of Darwin’s ideas was clearly wrong (because Epicureanism is wrong), the evidence itself would happily support a theistic evolution, and that in any case only a very wooden-minded reader would suppose that Genesis 1 referred to six 24-hour days.

The great irony of all this is

(a) the six-day creationists routinely miss the main points that Genesis 1 was written to teach, particularly the creation of the heaven/earth world as a TEMPLE in which God dwells and is represented visibly by his image, i.e. humans, the ‘royal priesthood’; [IP – see John Walton’s The Lost World of Genesis One]

(b) some of the most fervent anti-evolutionists today nevertheless also embrace a rabidly Darwinian view of world politics in which the strongest and fittest — i.e. the United States — has the right not only to survive but to dictate terms to everyone else; and the poor and weak are poor and weak because it’s their fault, so we shouldn’t help them.

(c) And many conservative Christians, alas, are basically ‘interventionist Deists’ (an oxymoron, I know): they believe that God is normally absent but that he sometimes suddenly steps in to do ‘miracles’ and then goes away again. (Putting it crudely, but that is actually what it comes down to for many people.) We won’t make much headway until we all learn from serious and open-minded students what the Bible is actually saying — not only about the origins and meaning of the universe but about the nature of power and the responsibilities of image-bearing humans within God’s world. And about the way heaven and earth were made to go together, and how they already overlap and interlock in Jesus and the Spirit . . .[See Wright’s Surprised by Hope]

In the spirit (and, indeed, the Spirit) of continuing and deepening the conversation, I will simply point you to N.T. Wright’s books. Of course, a list like the following can be overwhelming. My suggestion is follow your interests. Pick one and start reading. Click here for N.T. Wright’s books.

Related Pages: Christianity and Science, How To Read the Bible for All Its Worth